Nic Starr’s second book in her RUSTIC series titled RUSTIC MEMORY is OUT today and she is here with us to tell you some more about it! But first, I'm sharing my review of the story.

Sometimes you just want to sink into a story and enjoy the reading experience. You want to get to know a couple, find out what makes them who they are and watch while they find joy in life. Rustic Memory allows you to do just that. Tyler has known pain, a lot of it, and love has put him through the wringer. We meet him while he’s adjusting to a new life back, no longer back in the city, but in his home town.
He comes face to face with someone he used to know; the boy he knew as Robbie is now Mac. Mac is an electrician, following in his dad’s footsteps after Parkinson’s has left him an invalid. Mac’s example of love? His parents have been together for forty years, and his mother takes care of his dad, insisting he’s no burden.
That’s a depth of love not everyone finds in life.
Love at first sight? That’s even rarer. For Tyler, when he sees Mac, that’s the last thing on his mind… but lust sure had him in his grip. Mac’s been holding a torch for a lot longer, and he has the upper hand, knowing exactly who Ty is.
Any type of relationship creates its own drama and dynamic, but I loved the pacing of Mac and Tyler’s romance. This story felt like it had a natural arc that didn’t let me down, though I did find the end to be a bit abrupt; I wanted to bask in the love just a little bit longer. I absolutely adored the warm fuzzies I took away from reading Rustic Memory; it sucked me in and kept me reading long past when I should’ve been asleep, but I couldn’t resist the lure of just one more page, and then another and another… until I hit the end before I knew it.
When does the next book come out again? 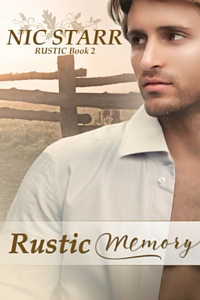 
Blurb: Tyler Samuels had his reasons for leaving the country town where he grew up. He moved to the city, established a home and a career, and found love. Now Ty is in his early thirties, and as his life takes another tragic turn, he finds himself returning to the place he first ran from.


Mac McGrath has lived in Armidale all his life. He loves his family and his job as an electrician, running the family business. The only thing missing in his life is a relationship. When Ty, his teenage crush, arrives back in town, maybe he has found someone to love at last.


What starts as friends with benefits quickly turns to more for Mac, but Ty will need to let go of his memories if he is to learn to love again. But can Mac wait that long?


“Hey.” Ty looked up from his desk and removed his glasses. “All finished?”


Mac nodded. “I got everything done I wanted to do today. I’ll be here early tomorrow to connect the transformers to the new lights while the electricity’s off. Here.” He opened his notebook, took a sheet of paper from between its covers, and held it out across the cluttered desk to Ty. “This is the extra information on the lighting behind the bar.”


Ty reached for the sheet of paper, his fingers grazing Mac’s. It took every ounce of resolve Mac possessed for him not to flinch at the contact. He wasn’t going to let Ty see the effect one simple touch had on him.


“That was quick.” Surprise flashed in Ty’s brown eyes.


“Uh-huh. I took care of it at lunch. I called Dave and he’s given some indicative figures. Of course, it’ll need to be verified with actual measurements and final quotes from suppliers.”


“That’s okay. We agreed back of the envelope would be fine. This is more than I expected, especially in such a short time frame.” Ty put his glasses back on and studied the paper for a moment. He stuck his pen in the corner of his mouth and chewed gently on the end.


Mac was mesmerised by the sight of those soft lips and the movements they were making. Fuck! Why did he have to be so attracted to the man? Ty took the pen from his mouth and made a couple of notes in the margin of the paper before looking up. “This looks great. If the numbers are accurate, then it certainly seems achievable.”


Ty smiled broadly and ran his fingers through his hair, pushing the strands back from his face. Mac followed his movements, taking in the planes of Ty’s cheekbones, the line of his throat, watching his Adam’s apple bob as he swallowed.


Mac blinked to refocus and reminded himself he was here for business. “Well, if that’s all you need, I’ll be off then.” He tucked the notebook under his arm and turned towards the door.


He swivelled to see Ty rising from his chair. The chair hit the wall with a thud and Ty rounded the desk. He stood in front of Mac within four paces, looking up at him with those big brown eyes.


“You want to talk about the job?”


Ty scraped a hand through his hair again, causing the strands to fall across his face. Mac’s fingers itched to move, but he resisted the temptation to tuck in the errant lock. Ty closed his eyes briefly, his lashes fluttering against his alabaster skin.


He really is beautiful.


“I was hoping I could convince you to stay for a while,” Ty finally said.


Mac studied him a moment, trying to understand exactly what it was Ty wanted. Ty left him with no question when he stepped closer and brought their bodies together. Ty slipped his slim arms up to grasp around Mac’s shoulders, and he tilted his face up. Mac held his breath as Ty’s eyes glazed over and his tongue darted out to lick his lower lip. Mac was rooted to the spot, mesmerised by Ty. Heat flooded his groin and he tingled with the need to touch this man, his man. Ty.


“I don’t have long,” Ty whispered and pressed his erection into Mac’s thigh.


“Yeah,” Ty stood on tiptoe and murmured into Mac’s ear, his hot breath sending a shiver down Mac’s spine. “Got to head out soon, but before I go….” His words faded out as he nuzzled Mac’s neck.


What the fuck? This is a booty call?


Mac’s head wanted him to shove Ty away, but as his hands came up and grasped Ty’s upper arms, he found himself pulling instead of pushing. Ty’s breath hitched and he trembled. “This what you want?”


Mac brought his mouth down on Ty’s, the kiss hot and wet as he forced his way into the depths of Ty’s mouth. Ty’s response was a mumbled groan, but the way his fingers dug into Mac’s shoulders and his hips flexed up to rub along Mac’s thigh gave him the answer without words.


They grappled with each other, Ty shoving Mac against the wall and Mac turning the tables and pushing Ty until he forced him to take a few steps back. The desk stopped Ty’s movement, and Mac used the surprise to tear his mouth from Ty’s and spin him around. A hand between the shoulder blades had Ty folded over the desk, barely missing the computer monitor and sending a cascade of paperwork to the floor. Ty groaned but didn’t try to stand up.


Mac grasped a handful of Ty’s hair and bent over his back. “You want this?” He panted against Ty’s cheek. He felt Ty’s answering nod. 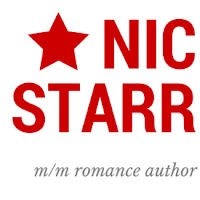 Nic Starr lives in Australia where she tries to squeeze as much into her busy life as possible. Balancing the demands of a corporate career with raising a family and writing can be challenging but she wouldn't give it up for the world.


Always a reader, the lure of m/m romance was strong and she devoured hundreds of wonderful m/m romance books before eventually realising she had some stories of her own that needed to be told!


When not writing or reading, she loves to spend time with her family-an understanding husband and two beautiful daughters, and is often found indulging in her love of cooking and planning her dream home in the country.


You can find Nic on Facebook, Twitter and her blog. She'd love it if you stopped by to say hi. 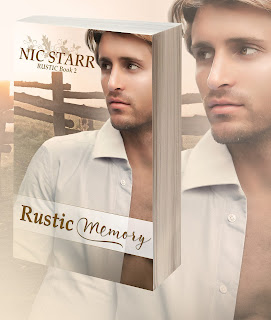 Posted by Alicia Nordwell at 1:00 AM No comments:

I have a new short story in the works, a paranormal alternate earth, that may also turn into a much longer novel later on. Care for a little preview?


“Sudal, verl of Prasuza clan, come forward!” His father’s voice rang through the room, and it fell silent, not even a rustle of fabric to break the solemn rite.

The knowledge he’d experienced his first flight solo gave him the patience for the ceremony that had been drilled into him since before his memories began. Sudal took a step forward and extended his arms and his newly-hardened wings. In contrast to the pure white of his formal garments, his sails were a stark red in the moonlight and the shiny black ribs gleamed.

Already sore from his secret flight, Sudal’s muscles protested as he worked to keep his wings open, the outer edges sweeping past his fingertips, but he would not hurry. He might resent his role as a clan verl, but he would not shame his father or himself by any public deficit in his expected duties.

His rebellion was internalized, and all the more bitter for being unvoiced.

Once Sudal reached the well he stopped and bowed low. The moon’s reflection shone inside the great stone bowl, and the wind from the open windows ruffled the surface. Sudal dipped the tips of his ribs, painting the hooked claws with the holy fluid blessed by the light of their protectors. “I come before the assembled clan newly changed, prepared to take my place among their ranks.”

He turned and faced the throng, locking his gaze on the chamber doors. From behind him, his father addressed the assembled clan.

“This man has come to be counted as one of the clan’s adults. What say you?”

It was foregone conclusion, but he held his breath until their throats swelled with a single shout that echoed off the high ceiling. “Worthy.”

He slowly sank into a low bow, holding the pose for the count of three, and then rose.

“The ceremony will be held tomorrow upon the rise of the full moon.”
Posted by Alicia Nordwell at 8:23 PM 4 comments: