Coming Tomorrow!! Beneath the Surface by M.A. Church

As a beta reader for M.A. Church, I can personally assure you that this is a great story! Not familiar with her work or you've missed her promo so far for Beneath the Surface? Well now you can, and then make sure you pre-order your copy that will be released tomorrow!!

Ten things you didn’t know about me!


*I hate spiders. Hate, hate, hate them. They freak me out with their long creepy legs and teeny tiny bodies.


*I refuse to watch horror movies because they give me nightmares. I have an over active imagination that certainly needs no help.


*I’ve never written fanfic. I know a lot of M/M writers got their start doing that, but not me. When I first started writing, I did write at a free site, but I wrote original stuff.


*My favorite holiday is Halloween. When I still taught, I dressed up like a black cat for Halloween at school. I didn’t do much, because we weren’t allowed to do anything too outrageous. I wore black pants and a black shirt… and black cat ears. And I also fixed my face to look like a cat.


*I don’t drink coffee. *the horror* Yep, that was never an addiction I acquired in college.


*I have allergies, and sometimes I have sneeze attacks. I can sneeze like twenty times in a row lol.


*When I was in my twenties I wanted a tattoo, but couldn’t get past the needle. Now I just watch Ink Masters lol.


*I’m not afraid of black cats. I’m not a superstitious person. 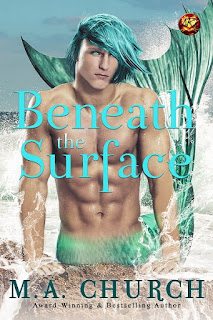 Beneath The Surface by M.A. Church


A whole different world exists beneath the surface.


The last thing Nisha expects while patrolling his territory is to find his mate, but his instincts tell him the handsome human diving into the surf is the one meant for him. Two bites and Kannon will be joined to him forever. But when Kannon’s father disrupts the mating process, Nisha releases his claim, hoping beyond hope his mate will one day return.
While free diving with his father, Kannon is bitten by a seductive merman. Although he swore to never go near the ocean again, the pull to return to the water and his mystery man remains strong. Finally, after fifteen years away, an impromptu wedding brings Kannon back to the Seychelles, and his destiny.
Kannon only plans to stay on the island for a week, but this time Nisha won’t let his mate go without a fight. Merfolk and human culture collide as the embers of Nisha and Kannon’s mate bond ignite, and Nisha must complete the mating before it’s too late.


Excerpt:
A whole different world existed under the sea—lighting, sounds, even the feeling of otherworldliness. No matter how clear the water, it still played tricks, even on experienced divers.


The colorful tropical fish, artifacts, and the remnants of history buried beneath the waves—along with a mysterious landscape mostly untouched by humans—always gave Kannon a thrill. Parts of the reef weren’t very deep, so he had no trouble freediving.


This year for vacation, Kannon and his dad rented a boat and guide to take them to the reefs around the Seychelles. This was by no means the first time he’d gone snorkeling. Growing up along the California coast guaranteed Kannon was comfortable in the water.


The guide had warned them to stay together, but Kannon had other ideas. Besides, he wasn’t going that far off. After investigating the colorful reef fish and interesting coral formations—and seeing his dad was distracted—Kannon slowly but steadily wandered off on his own. An outcrop of rocks covered in algae caught his eye, and he went to investigate.


Many of the multihued native fish swam past him, curious as to what he was. It was funny how they circled him. Kannon held his hand out. A few braver fish darted in, nibbled at his fingers, and then swam off. God, what a rush it was. Nothing was better than this.


He drew closer to the outcrop, surprised it was much deeper than he’d first thought. Huh, not an outcrop, but the mouth of an underwater cave. Cool. From a distance it appeared to be nothing more than oddly shaped rocks. Peering inside, he was unable to see past the murky blackness within.


Curious, he reached his hand out, stretching toward the mouth of the cave. His scalp prickled. A tingle washed through him. The water around him caressed his body as he hung weightlessly, staring at the cave entrance as his dick swelled in his trunks. What the…?


His heart rate sped up—not a good thing underwater—and the feeling of being watched crept across his nerves. Something was in there, and his mind screamed at him to get away even as the urge to reach inside nearly overwhelmed him.


Kannon’s body swayed dangerously closer. His nipples ached as the water flowed past, and he had to force himself not to whimper as need struck him. He jerked back. There’s something waiting for me, just waiting for me to reach in so it can... what? So it can do what?


Jesus, he needed to get a serious grip on his imagination, and crap, he had to surface too. Lack of oxygen made the decision for him. All this panicking on his part had used up his air—stupid of him.


He surfaced and shook the hair out of his eyes. Wow, is that our boat way over there? Oh man, Dad’s going to kill me. Worried about the fit his dad was going to have, he was totally unprepared for the strange guy who popped up next to him, although “guy” might have been overly nice.


Kannon yelped, but the dude across from him just smiled. The androgynous, fey face wasn’t quite human. The long pointed ears were a good indication, as was the glimpse of sharp little teeth.


Oh, and the gills at its neck.


Azure blue hair floated in the water around shapely shoulders and cobalt blue eyes stared back at him. It was a visage that was hauntingly beautiful, otherworldly, and a tad disconcerting. The creature smiled slightly as if he agreed. It—whatever it was—scared the bejesus out of him.


Then it reached out and dragged Kannon under the water.

AUTHOR BIO
M.A. Church is a true Southern belle who spent many years in the elementary education sector. Now she spends her days lost in fantasy worlds, arguing with hardheaded aliens on far-off planets, herding her numerous shifters, or trying to tempt her country boys away from their fishing poles. It’s a full time job, but hey, someone’s gotta do it!


When not writing, she’s on the back porch tending to the demanding wildlife around the pond in the backyard. The ducks are very outspoken. She’s married to her high school sweetheart, and they have two grown children.


Goodreads
Posted by Alicia Nordwell at 1:00 AM