Please welcome Jon Keys to my blog. He's been kind enough to do an interview and also shared some information on his new release, Razor.


Oh, Jerry without a doubt.


What are you wearing (and no fibbing!)?


Snow clothes! Yesterday it snowed all day and dumped on us. So…I’m wearing flannel lined pants (which are becoming favorites), a black and red flannel shirt, a baseball cap (to cover the hat hair from the stocking cap) and snow boots. Pretty stylish huh?


Are you a person who makes their bed in the morning, or do you not see much point?


Don’t see the point. Although, I do love crisp clean sheets. Maybe I need to reexamine the stance.


Name one entity you feel has supported you in your writing endeavors outside of family members.


I guess it’s not exactly the question, but it was the early fans who kept me writing. I started because I wanted to tell a different story of rural characters. I was apprehensive about the response, but the readers were supportive and loved the work. Nothing like appreciative readers to get the creative juices flowing. Now…now I’ve gotten some of the harsh criticism. I’m glad I went through the supportive ones first.


Is there anything you find particularly challenging in your writing?


Beginnings! Oh my, I rewrite beginnings so many times. I’ve thrown out whole scenes, started in new places, just about everything. I eventually get them, and some are easier than others. But yeah, opening scenes and I have a few words before we decide to work together.


When did you first consider yourself a writer?


You know, I think I’ve always considered myself a writer. I have a favorite podcast and they are always saying “a writer writes” and I think that’s been my philosophy too. I wasn’t a published writer, but I was a writer.


How did you come up with the title?


Well I like it when the title of the work is successful on several levels. Razor works at a literal level, because a razor plays heavily in the story. But James and Micah are also walking the edge of the razor in their lives. It’s also a sense of masculinity lost. So, several different levels.


What sort of coffee would your characters order? Simple coffee, complicated soy-non-fat-extra-espresso-half-caff-nightmare?


That’s pretty funny, because I know exactly which would have what. James would be strong black coffee, the kind you could clean automotive parts in. Micah would definitely be the soy-non-fat-half shot of espresso, and be picky that each part was right.


What was your favorite part of the story?


Oh, wow. That’s tough. I guess it depends on what you’re looking for. There are a couple of scenes that choke me up, even after as many times as I’ve read it. There is a scene with elevator sex that makes me laugh every time. I like the first meeting outside of the bar too. I love the image of the doorman.


What are your future projects?


Well, my first fantasy novel, Obsidian Sun, has been submitted and I’m doing the impatient author dance. It’s a rescue story in a world where the magic is based on weaving and a symbiotic relationship between the weavers and spinners.


I have another fairytale retelling that I’m working valiantly to finish editing. This one is a retelling of Cinderella, but of course Cinderella is male…and a cowboy. I think it’s a fun read. I have another novel that I’m editing too. It’s being more difficult though. It’s a country mouse/city mouse plot, with a few serious twists.


The others are in that mystical folder named “new ideas”. Obsidian Moon, the sequel to Obsidian Sun, is in the planning but about all I know about it is there will be a triad that are assassins. But who knows what will have the biggest draw on my attention when I get ready to write something new.

Now on to some story details to whet your appetite for more! 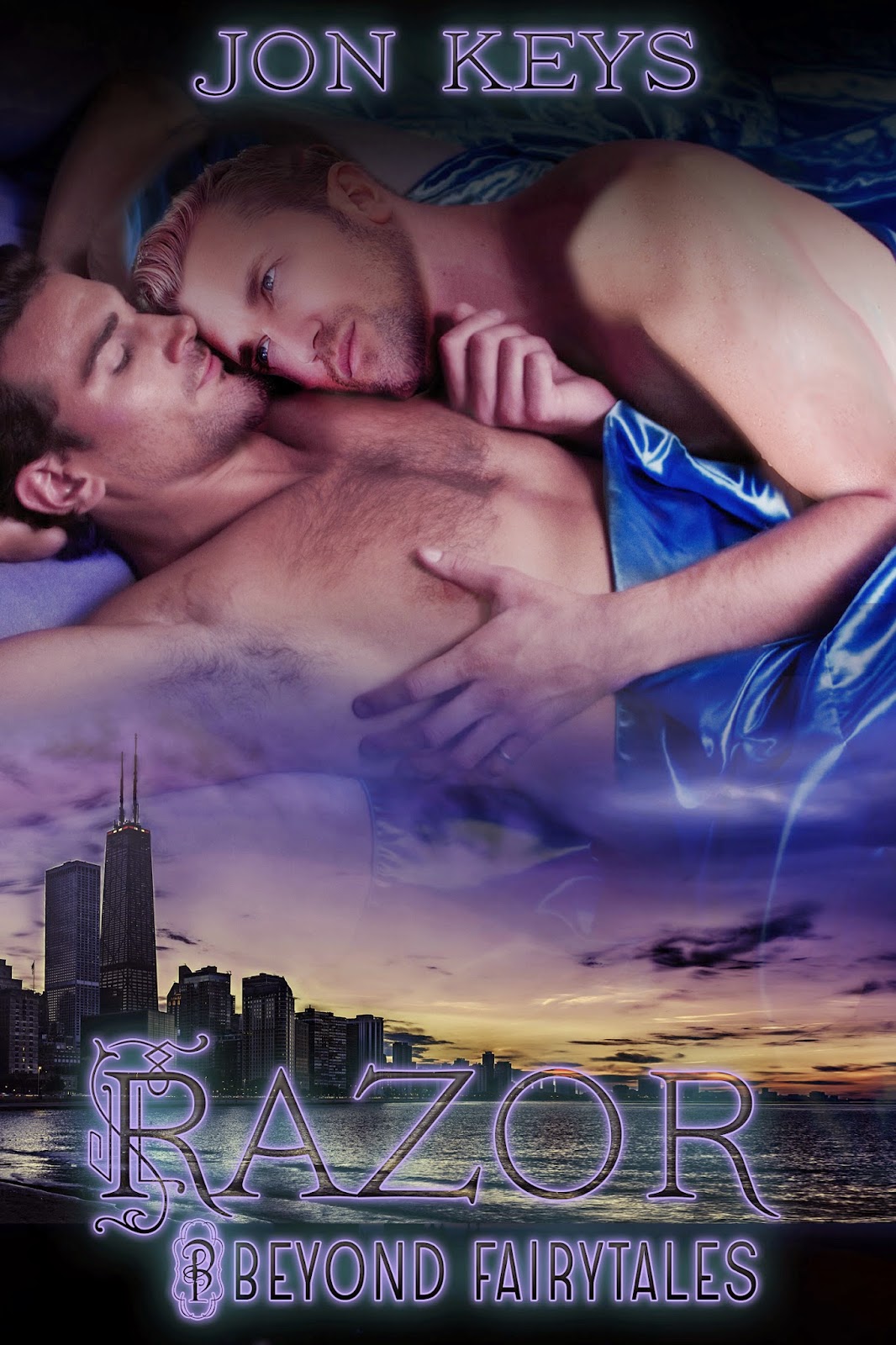 When the world crashes down around your ears, sometimes all you can do is punt and hope for the best. That’s exactly what James and Micah decide to do when one of them is diagnosed with cancer, and the other discovers a serious heart defect. When the doctor tells them to start working on their bucket lists, the two take a trip in an effort to create some good memories, and forget the ugly truths, while they focus on their time in each other’s arms.

Their vacation turns into much more than they anticipated when they find themselves drawn to a club like sailors to a siren. Several sexy waiters, some unforgettable lap dances, and one whip-wielding stud later, they stumble upon the answer to their prayers. Their sex is wild again, and the pair find themselves living for tomorrow. But with every answer comes questions, and Micah’s search for more may destroy them both.


Will they be able to recover from his thirst for the truth? Or will the men always live walking on the edge of a Razor?
Buy Links:  Decadent Publishing  Amazon   iTunes   Kobo
Excerpt
Micah made the landing and stood watching James ascend. A few seconds later, he reached the top and looked around. They found themselves outside a door almost as dark as the night, set into a wall of Cimmerian brick that disappeared into the gloom on either side. The doorman standing beside it was equally striking. He stood taller than James’s six feet, and wore only a black leather kilt and heavy boots that seemed to consume the lower part of his muscular legs. No one would dare challenge the man. His torso rippled in ways James had never seen before. His face was rugged, covered with a few days’ scruff trimmed precisely along his jawline. Before he could think of what they should do, the doorman spoke.
“Welcome to Razor. What’s your pleasure tonight?”
James stood speechless as the deep bass of the man’s voice resonated through the night. “The music. The music is wonderful. We caught it from a few blocks off and wanted to hear more.”
A smile emerged on the man’s face and changed him from executioner to guardian. “Of course, the music. You’ve found the right place. Just in time, too. Tonight is drawing to a close.”
He grasped the bronze door pull that was easily as long and thick as James’s forearm and opened the massive door with little apparent effort. He motioned them into the portal with a wave. “Go. Enjoy yourself.”
The pair moved toward the opening and peered inside. The room was dim, except for an empty stage bathed in warm light. James noticed the musical trio creating the instrumentals that had lured them through the foggy night. They glanced back to the grinning bouncer who encouraged them forward with a nod.
They stepped into the room and paused to take it in. From the elaborately carved dark mahogany bar lined with every imaginable type of liqueur, to the lovingly worn floor that had seen thousands of pairs of feet during its existence, it was all club. The couple moved inside as the door closed behind them with scarcely a whisper.
As they studied the room, two things struck James. First, they were the only customers. Second, everyone else in the room wore very little and were male. Their smiling waiter stepped to their table. James swallowed hard as he looked at the man standing before him. He dressed in the same boots as the bouncer, which were buckled to just below his knees. The remainder of the waiter’s clothing consisted of a black leather jockstrap filled to capacity.
Posted by Alicia Nordwell at 1:00 AM