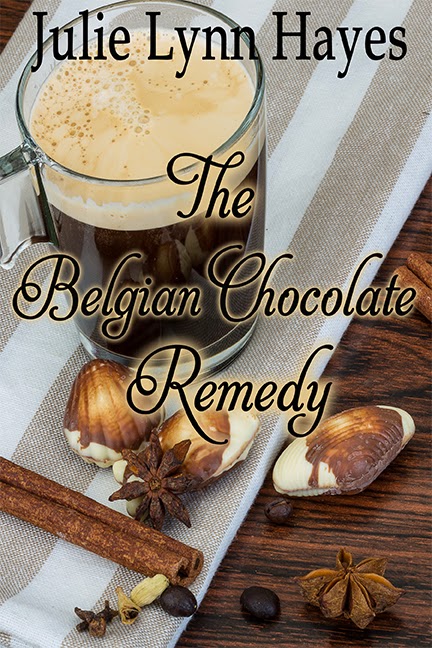 Blurb:  Milan, a Belgian chocolatier, has lost his beloved brother. Yet life goes on, and he must ready his booth for Outfest—Ludolf would have wanted him to carry on. Jesse is a rudderless soul, unable to cope with the rejection of his lover. He comes to Lafayette, Indiana at the request of his best friend, Reggie. She inveigles him into helping her friend Milan… a way to pass the time, or something more?

Excerpt:  Milan had gone back to his last batch of chocolate—unscathed and unburned—and removed it from the burner, where it was cooling. “Would you like to brush the molds with chocolate?” he asked.

“Sure, I guess.” Jesse shrugged. It didn’t seem that difficult, at least in theory. “What’s it for?”

“To coat them.” Milan pulled a pastry brush from a drawer. He already set the molds out; they were simply waiting to be used.  “I have some in the freezer already done,” he explained, seeing Jessie’s questioning look.  “This is not all I have.”

“Here.” Milan carried the pot of chocolate to the center of the work table. “Set a trivet there, will you?”

“A trivet,” Milan repeated, nodding to the counter behind Jessie.  “That blue thing there. I will set the pot on it so it does not burn the surface.”

“Sure.” Jessie laid the round blue object onto the table, as Milan set the pot.  “Take the brush and dip it like this.” He demonstrated just how far into the chocolate he wanted him to go. “Then lightly brush over each mold, like so.”

Jesse admired the ease with which Milan worked, as if he’d been born to do nothing else. He had very nice hands, he noticed. How would those hands feel on Jesse’s cock? Would he touch it with the same care? His breath caught at the thought.

Milan offered the pastry brush to Jessie. He shook himself from his reverie and took it, pushing the forbidden image away. “So you’re selling these tomorrow. At Outfest. Right?”

“That is correct,” Milan replied. “You are coming, yes?”

“I am unless I want Reggie to tan my hide.”

“She would, you know,” Jesse continued, “You ever see her get mad?”

“Yes, I have,” Milan admitted, “I would not care to be the object of her anger.”

“A little lighter, please.” Milan had been watching Jessie work. “Here.” He laid his hand over the other man’s. “Like this. Just enough to coat it. I will fill it in after we put in the fruit.”

Their eyes met and for a moment their hands stopped moving, each acutely aware of the other. Milan broke away first. “I will do this one,” he offered, “then we can do the first freeze.”

“Yes. We are forming a shell so it will hold the weight of the candy.”

“Okay.” Jesse thought it made sense, but what did he know. He dipped the brush into the chocolate again, making his strokes lighter, earning a “bon” from Milan. He knew enough French to know that meant good. He relaxed a little at the praise.

Once they had set the molds into the freezer, Milan removed the completed candies that waited there. He showed Jesse how to unmold them, and how to put them into their little paper beds, and into the waiting boxes. Then he let him apply the second coating himself.

“You are doing well,” he encouraged him.

A few minutes of companionable silence passed, Jesse concentrating on the task at hand, Milan stealing surreptitious peeks at the brunet. Whether he was willing to admit it to himself, he was glad for his company. Jesse’s presence was pushing the shadows away.

“This is your place, right?” Jessie encompassed the kitchen with his glance. He couldn’t help but feel a lot of love had gone into making this room the place it was. More than a kitchen, it was Milan’s haven.

“When are you going to open, then? Reggie said you were going to open your candy store after Outfest, right?”

Milan paused in the act of retrieving a container of raisins from the refrigerator. It was a legitimate question. It’s what businesspeople did—they opened for business. So why was he so hesitant to set a date? Maybe because he didn’t see it ever happening, without Ludolf’s guidance.?

“I do not know,” he mumbled, setting the bowl on the table, not meeting Jesse’s eyes. “There is work that needs to be done, construction work and…and licenses…and I do not know what, I mean I just do not know…”
Jesse reached out his hand without thinking, but Milan had already turned away. Jesse’s heart ached for the other man—he sounded so alone, so lost. Jesse wanted to gather him up in his arms, comfort him, soothe him, stop his tears, and end his pain. And yes, he wanted to get naked with him, too—to touch him, feel him, and lose himself in Milan. He wanted to taste his lips and take away his misery.

His feet moved, as though his thoughts had manifested themselves into action. His fingers brushed across the top of the table as he edged around it, toward Milan. He had no clear purpose he simply needed to be closer to him.

Milan was a few inches taller than Jesse, he discovered, as he came up behind him. Jesse’s lips were at about the level of Milan’s jaw, and he found it hard not to simply kiss him there, to stop his shoulders from shaking, to stem the tears he suspected were falling. He reached up his arms, wanting to hug Milan to him tightly, to take the first step—

The tinkle of the shop bell. Jesse retreated, stumbling back to his side of the table. In his haste, his hand knocked a spoon off the table. It clattered onto the floor. Milan spun around, dabbing at one eye with his right hand.  He left a small smear of chocolate on his cheekbone. Jesse bent to retrieve the spoon, resisting the urge to wipe the chocolate away. The moment passed; he felt like a coward.

Julie Lynn Hayes first began publishing short stories and poetry in the 1990’s, when it was a different ballgame altogether, and Ebooks hadn’t been dreamed of yet. That changed in 2010 with the acceptance of her first romance novel. She’s come a long way since that first book appeared, and is finding the journey a very educational one.

She lives in St. Louis with her daughter Sarah and her cat Ramesses. She often writes of two men finding true love and happiness in one another’s arms, and is a great believer in the happily ever after. She likes to write in different genres, to stretch herself in order to see what is possible. Her great challenge is to be told something can’t be done—she feels compelled to do it.

When she isn’t writing, she enjoys crafts, such as crocheting and cross stich,  needlepoint and knitting, and she loves to cook, spending time watching the Food Network. Her favorite chef is Geoffrey Zakarian. Her family thinks she’s a bit off, but she doesn’t mind. Marching to the beat of one’s own drummer is a good thing, after all. Her published works can be found at Dreamspinner Press, eXtasy Books, and Amber Quill Press.