It's here already! Amazon jumped on the process and already published Disastertastic, my holiday romance novella, so it's already available for purchase. 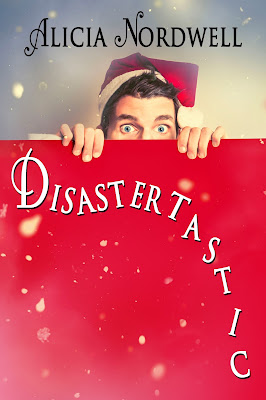 Blurb: Sawyer is too busy to worry about something as frivolous as Christmas. College is hard, but he’s focused on getting into law school. Kable is studying to make the family business, Del Buon Gusto, into a successful chain restaurant. When a party debacle at the restaurant gives Kable a chance to get close to Sawyer, he’s shocked to learn Sawyer’s a Christmas Grinch. He's determined to change Sawyer’s mind, but their dates are one debacle after another. It might not be possible to make this into Sawyer's first Merry Christmas after all.

Excerpt:
What a waste of time. He could’ve been home starting his paper or even watching a movie if he wanted to slack off.

Fed up avoiding questions of family traditions and travel plans, Sawyer strolled away from the crowd in the dining room and headed toward the tree. He nodded and smiled at a few people but didn’t stop. Everyone else was enjoying the appetizers that had just come out, but he’d already had dinner before he left home, since he’d expected to work. He could pass more time pretending to examine the ornaments or watching the snow drift down now that the storm finally hit. He’d just have to wait a little longer until he could politely make his escape.

“What?” Sawyer blinked and shrugged the hand off his shoulder. He took a step to the side. He’d been focused on the snow, watching the puffy flakes float down to coat the sidewalks and road. The grassy verge along the road was already completely white. He hadn’t even heard Kable approaching, which was odd because he was normally impossible to miss. He was just as loud and energetic as his dad.

“Your cup is still full.” Kable gestured toward the red cup in Sawyer’s hand. “Usually when you don’t drink something that means you don’t like it.”

“It smells gross, and I definitely don’t think a dairy product should be this thick and still be drinkable.” Sawyer’s filter was gone, just like it usually was around Kable. He got so nervous, he always ended up saying whatever came to him. It wasn’t like he was trying to hide that he was gay—everyone already knew that—but he hoped his crush wasn’t as obvious. He’d had enough embarrassment for the evening.

Kable laughed. “Then why’d you take it?”

“It seemed like the thing to do.” Sawyer rotated the cup between his palms, disgusted by the way the glop reacted. Surely it couldn’t be safe to drink the stuff.

“So, is it just dairy-based holiday drinks you don’t like? Or is it something more? You haven’t had a single thing to eat, and you’re not exactly dressed for the party.  There’s so much fun to be had from dressing up for Christmas parties.” Kable waved a hand in front his chest. “Like this.” He was wearing an awful sweater with reindeer prancing around a Christmas tree that had bedazzled ornaments decorating every puffy bough. Not even something that hideous could detract from his dark-haired, blue-eyed handsomeness... but really, Sawyer shouldn’t be noticing that at all.

Sawyer scoffed. “I’d rather be here in my underwear than wear something like that.”

“Or your uniform?” Kable gestured toward Sawyer’s black slacks and plain white shirt. “Is it just that you don’t have another outfit?”

“Of course I have other outfits! Why would you think that?” Sawyer snapped. His face was hot and prickly; no one else had mentioned his clothes, even if they noticed he was wearing his work uniform. It’s not like he was wearing something inappropriate, like shorts and a t-shirt.

Kable cocked his head to one side. “If you had something else, why didn’t you wear that?”

“You’re nosy, you know?” He was always asking questions and getting into everyone’s business. The others didn’t seem to mind. Kable was Mr. McArthur’s son, and he worked the occasional shift at the restaurant when they were short a waiter even though he was in school full-time to get a business degree. He was friendly, sometimes too friendly, and made Sawyer uncomfortable with his casual intimacy. Kable was always patting him on the back or arm when they spoke, and Sawyer liked it a little too much.

“Yep.” Kable grinned. “But wait, don’t tell me! You never come out for a drink with the rest of us, not even for coffee, and you’re always studying those books on your breaks. I’ve never heard you even talk about doing something like going to a party. You thought you were here to work tonight, didn’t you?”

Sawyer grit his teeth. “So what? Your dad just said he wanted us all here.”

“And you didn’t put two and two together?” Kable gestured toward the room.

“I did once I got here. He said he was throwing a party for friends and family. What else was I going to think?” Sawyer was getting tired of Kable’s questions. He lifted his before Kable could notice his scowl and figure out he was getting to him and made the stupid mistake of taking a drink.

“Oh, ew.” Sawyer desperately wanted to spit out the eggnog, but there was no polite way to do so. He forced the mouthful down, swallowing repeatedly in an attempt to get rid of the liquid still coating his tongue. It was as horrible as he thought it would be. He stared at the cup in disgust. “People actually drink this... on purpose?”

Add it to your Goodreads shelf!

Posted by Alicia Nordwell at 9:36 PM