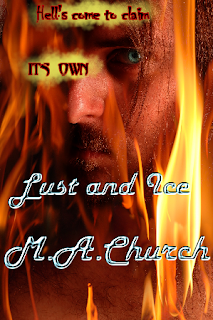 The perfect mate for a cold-hearted human with no redeeming qualities? A prince of hell, who else?

My latest release is called Lust and Ice and is a Dark Desires novella, available October 19th from Razor's Edge Press, a Changeling Press LLC Imprint. Yes, this is one of my dark stories. :) And yes, lol, there's a HEA—of a sort. When dealing with a Prince of Hell things can get twisted. So, there's HEA... then there's this kind of HEA.
LOL.
Two more novella's spin off this book and the Bad Boys Club. In Lust and Ice you'll meet Kain's friends—Hugh, Jordan, and Allen—and they're as bad as Kain. Jordan and Allen's book will be next in the series.
Razor's Edge Press www.RazorsEdgePress.com A Changeling Press LLC Imprint 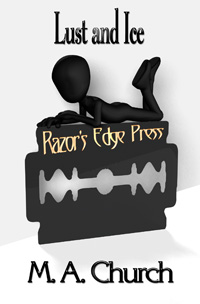 Blurb:
They call him Ice. Kain's a spoiled rich man's son with money to burn. An endless parade of men through his bedroom has left him empty and wanting. When he and his friends meet at their usual nightclub and place bets on who'll score for the evening, Kain eyes a sexy stranger. Electricity jumps between them, and Ice decides the handsome man will be in his bed screaming out his pleasure before the night is through.
Dark and deadly desires are Asmodeus' calling cards. Those that fall to his wicked ways are doomed to an eternity of unfulfilled lust in the second level of hell. This is no man to be played with... because this is no man. He's the Prince of Lust, one of the seven princes of hell. And he's been granted the right to take a mate by his master, Lucifer. He's searched through the ages for the one that will satisfy his sinful needs, but none have made the cut.
Until now.
The Bad Boys club has picked the wrong targets this time -- hell's come to claim its own.

Excerpt:
Asmodeus toyed with his straw as he glanced over the crowd on the dance floor. There were a few that caught his eye, but nothing that got his blood pumping. His appearance not only fit in at Night Moves, but called certain types to him, preferably men. For the last hundred years he had taken to seducing the males of the human race.
“Mmm, there’s something about taking a strong man and bending him to my will, having him first beg not to be fucked…” He ran a hand down his chest, drawing several pairs of eyes, and shivered. “Then later beg to be fucked.”
Frowning, he glanced over the dance floor again; he damn sure wasn’t going to get lucky sitting on his ass up here. He smoothed his hair behind his ear and a brilliant, sizable ruby stub flashed, as did the ruby in his signet ring on his left hand. He looked down at the tribal tattoo that started on his right wrist and extended up his arm. Thanks to the shirt, no one could see the tattoo snake over his shoulder and unto his neck. It also meandered down from his shoulder and covered the right side of his chest, then continued to his groin.
His dick was thick, but not overly long, and covered in small knots. There the tattoo crossed over his body and continued down his left ankle. Those that saw the tattoo in its full glory were already doomed, although they didn’t know it. Once his prey submitted to him, the end was never far behind. The fear in their eyes and the frightened begging that came from the lips of his prey as he drained them always excited him, made his orgasm much more intense.
The problem was that once he finished feeding the pleasure was gone, and loneliness bombarded him.
Now the mindless pleasure, the thrill of the hunt and his prey’s fear were no longer enough. He wanted -- Satan help him -- he wanted a mate. Someone who would belong to him ‘til the end of time. He’d made his wishes known to his lord and was granted the right to take a human, if he found one that fit his needs. So far no such human had been found, and he had looked -- extensively.
A perfectly shaped eyebrow raised above wickedly sinful eyes. Several men and women had played the game and fallen for his dark looks -- they regretted it eternally.
He was no man to be played with… because he was no man.
Shifting in his chair, his eyes landed on a group of humans across the openness of the second floor. A new mortal joined them, another male. There was a restlessness that shimmered around him that snagged Asmodeus’s attention. This one appealed to him, very much so. Even with the noise of the crowds and the thumping bass of the music, he could hear them. The longer he listened to the one named Kain, the more his dick swelled.

Bio:
M.A. Church lives in the southern United States and spent many years in the elementary education sector. She is married to her high school sweetheart and they have two children. Her hobbies are gardening, walking, attending flea markets, watching professional football, racing, and spending time with her family on the lake.
But her most beloved hobby is reading. From an early age, she can remember hunting for books at the library. Later nonhuman and science fiction genres captured her attention and drew her into the worlds the authors had created. But always at the back of her mind was the thought that one day, when the kids were older and she had more time, she would write a book.
By sheer chance she stumbled across a gay male romance story on the web and was hooked. A new world opened up and she fell in love. Thus the journey started. When not writing or researching, she enjoys reading the latest erotic and mainstream romance novels.