**Congratulations**
Three of my fellow Briefers, M.A. Church, Tali Spencer, and Shira Anthony,  are finalists in the 2013 Rainbow Awards! Way to go!!

Is it Wednesday already? It is, it is! And time to find out more about how Birch and Sayer are faring. This week my flash prompt inspiration was a candle flame. I hope you enjoy! 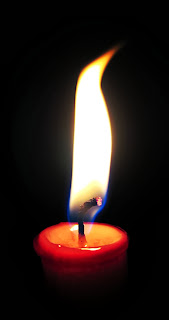 Birch was on his stomach surrounded by Sayer’s scent. He rubbed his face against the silky softness under him. A bed.


“He’s waking up.” Someone ran a hand through Birch’s hair. “Birch?”


“My lord, if you want me to check your beloved, you’ll need to allow me near him.”


“Hi.” Birch could barely a whisper and even that was a struggle. “Tired.” A bright light hurt his eyes. Tears filled his eyes, and he flinched.


“You’re hurting him!” Sayer sounded angry. Birch tried to turn his head so he could look at him. It was impossible for him to move. He could only breathe in shallow pants.


“My lord, you are not helping. He’ll be fine, but I need him to focus. I cannot heal him without his consent, no anymore.”


“What do you mean? You healed him before.”


Birch opened his eyes again. The bright lit was farther away. A few blinks, slow and heavy, cleared the spots left from the light. A red candle was cupped in the healer’s hand. That small light had blinded him?


“Sayer?” Birch slurred the word but Sayer’s hand was instantly on his head, brushing his hair back.


“You’ll be okay, beloved.” There was a pregnant pause.


“Yes, you will. You were drained of energy, but I can assist you,” Haverlseen said. He set the candle down. “We need him on his back.”


Gentle hands turned Birch over. Sayer was kneeling above him. He smiled at Birch, then leaned down and softly kissed his lips.


“My lord, please move back. I do not wish to entangle your energies in this and create a feedback loop that helps neither of you.”


Haverlseen stood over the bed, hovering one hand over Birch’s head and one over his heart. “My lord, you are still attempting to share your energy with King Sayer. He doesn’t need it anymore, but you do. You need to pull the power back inside you, where it belongs. I will guide you, and attempt to refresh you as well. Just relax for me, this won’t hurt.”


Birch closed his eyes. It was too much of a struggle to keep them open anyway.


“Open yourself to me, and seek inside. Find the well of your power, and the link to your beloved.” A red light suffused the image in Birch’s mind. It felt warm and comforting. He delved inside, looking for the source of the power. The light he found was a pale white glow that was pooled around a thick cable flowing away. Birch could sense the power leaving his body.


“You need to stop sharing your power, my lord. Imagine the cable becoming droplets and the droplets falling back down into the pool.” The image was easy to capture and the cable dissolved.


The red light grew brighter. Multi-colored blossoms began to drift down. They landed in the pool, slowly sinking. They melted into the water, staining it briefly with a rainbow riot of color. The pool rose, and the white glow began to shine brighter.


The weight on Birch’s chest making it hard to breathe lifted off. He took a deep breath.


The sluggish beating of his heart sharpened into a rapid thudding rhythm.


Birch’s eyes flew open. Slowly the doctor pulled his hands away. The picture of the light faded in Birch’s mind. He studied the rainbow hues in Haverlseen’s glowing eyes, the colors muted compared to before they’d started.


Haverlseen bowed. “It was my honor, my lord. You should still rest for the day. Your energy levels will recover fully given a little more time.”


Birch did feel weak, but his overwhelming exhaustion was gone. He asked, “What happened?”


Sayer lay down beside him. “What do you remember?”


“A Darkling had made carnivorous giant tulips come to life and was about to attack us. You needed my energy. Did we stop it?”


“Not only did we stop it, you released the Darkling from the wild magic taint. You freed him.”


Birch gaped at Sayer. “I did what? No, you were using the power.”


“I used it to hold him. You … you changed it. You told him to be free, and then … he was.” Sayer was staring in Birch’s eyes. “No one has ever been saved once they turned. You are a miracle.”


Sayer nodded, and leaned closed. “My miracle,” he whispered against Birch’s lips. Their mouths melded together. Birch gasped when Sayer yanked his hips closer with one hand under his ass. Sayer’s tongue invaded his mouth, stroking their tongues together until Birch was lost.


Sayer’s slipped his other hand between them. He rubbed at the ridge of Birch’s cock through his leggings. Desperate to breathe, light-headed with passion and lack of oxygen, Birch broke their kiss. He panted.


“I want you.” He stared up at the gorgeous fae king that had bonded their souls together. He ran a hand through the thick fall of sleek, white hair tumbled around their faces. “I need you inside me.”


Birch had never done it before, never gone all the way, but he burned to make love to Sayer. His heart pounding, his cock throbbing, he waited for his frozen lover to move. Sayer was frozen over him.


A finger across his lips kept Birch from speaking. “I’ve dreamed of nothing else for years.”


Oh. Oh man. If Sayer’s dreams were anything like Birch’s….


They were naked in moments. Sayer’s fingers touched every inch of him, outside and in. Cradled in the soft bed, Birch wrapped his legs around Sayer’s hips and pulled him closer.


“Please, now.” He couldn’t take any more. Those sleek massaging fingers had done their job. The burn of his first time was worth it for the bliss on Sayer’s face when he thrust his slick cock inside. When Birch felt the pleasure, he knew.

Whew... didn't live myself a lot of room there at the end, but I tried to get a bit of their loving in. Still way more to learn in the story, though. What can the ex-Darkling tell them? How did he succumb? Will Birch be able to help them? How? Oh... so much fun to come.

Okay, so obviously lots of other great updates for you to read now. We've had so many people join, the Briefers have a lot of authors sharing their flash this week. Check them out here: